Hello Out There ~~from Gracie~~

Tennis Courts?  Really?  Am I dreaming?

I'm not dreaming.  And I haven't even died and gone to heaven.  I might be crippled and depressed and half blind and deaf.  But I could see and smell that I was at the tennis courts.  ahhhhh....  Life is good.  Hard sometimes, but good. 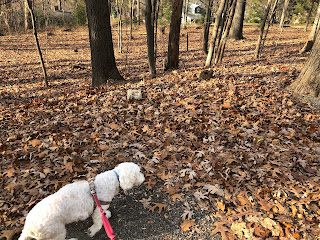 Thank you all for your kind comments following my last post.  I'm realizing that mornings just are not good for our Gracie-girl.  If she is not shaking, she is disoriented and it takes until well after lunch for her to get her bearings.  When she is like this, I put her harness on and lead her.  Otherwise she finds herself in a corner staring at the wall.

Another thing.  We have surrounded our bed with tall suitcases, stands, etc. so she will not inadvertently jump (she actually tries to fly) off the bed in the middle of the night.  We've already put our bed on the floor for her, but still it is a little high for her.  Now though, she goes half way down the ramp and gets afraid, then tries jumping either over the side of the ramp or to the bottom.  Ugh.  Gracie, Gracie, Gracie!  Needless to say, I usually do not rest well as I continually worry for her.

I know.  I know.  I should have never let her sleep in our bed with us to begin with.  Well, that's water under the bridge.  I will be hard pressed to take that luxury from her at this point. 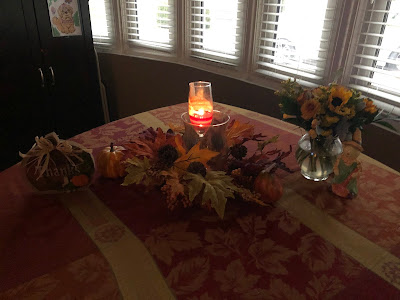 Yesterday (Thanksgiving Day) she had a shaky morning.  When we put her in the car for a little outing, she shook terribly and I considered taking her back inside.  But, it was only a ten minute drive and by the time we got there and got her out of the car thankfully she had calmed.  She loved smelling a new area and of course she had to push a dime sized poop out.  Just enough to sit in and smear over her hind end.  Thankfully, I had napkins in my car.  But in cleaning her, that dime-sized poop managed to cover my bare hand.  Thankfully, I had some Clorox wipes in the car too.  Problem solved.

So amidst the chaos I have my son texting me, "We are going to stop by" and my daughter texting me, "are you home yet?" and my other son whose car was broke down waiting for us to deliver his dinner.  So with one hand I held the  phone and tried reading the texts while with the other hand the poop was waiting for husband to get me one of the Clorox Wipes... meanwhile a big fat bee was contemplating hitching a ride since the passenger door was hanging open. I was thankful when husband swiped it away and he didn't swipe it onto me. 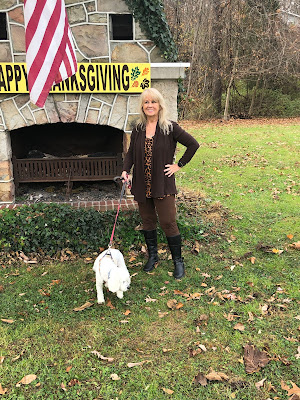 The day before Thanksgiving I had picked up take-out dinners from a great restaurant.  Thankful I did not have to cook.  They didn't charge me enough, so I asked them to re-check the price and then I paid more. Fifty dollars more.   Husband says - "something's wrong with you."  LOL.  He thinks I enjoy paying more.

The restaurant is a half-an-hour away.  When I got the dinners home, I was missing a salad, a dessert, and a gravy.  Maybe there is indeed something wrong with me.  Ha!

We had a good day yesterday and a full house.  Gracie, in her old age does not bark or try to intimidate guests anymore.  She just smells their hand and walks away.

Gracie spent the morning shaking so badly I thought something was wrong.  She couldn't seem to settle down and she skipped all her treats.
My mind goes wandering on days like today.  Is this it?
So we pampered and cuddled and gave her every single thing she wanted.  This afternoon she seems better and her treats have disappeared.  Maybe this is not it.  Maybe she was just having a slow start.  Maybe she will  hang in there a while longer. 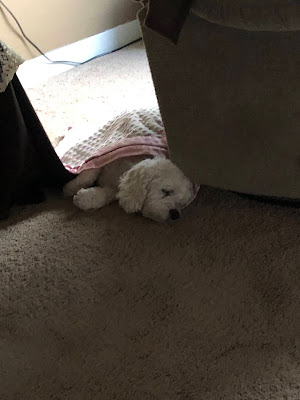 Back In High School

Today Daughter called and asked if I would go pick up 14 YO granddaughter from school.  There was a schedule change that Granddaughter was not comfortable with - so she needed rescuing.  I felt like a superhero.  I jumped into my sporty baby blue Elantra, and off I went!

As I reached the mountains just before getting to the school, the skies darkened, and the wind picked up.  Into the school parking lot, I drove.  Why all the police?  At least a half-a-dozen police cars were scattered, and the place was crawling with uniformed police officers.  Okay.  So, I was just a little concerned.  But there were students with signs too.  Maybe a protest?

As I exited the Grammy-Mobile, I was taken aback by the intense wind gusts and leaves stinging my face.  A more diminutive grandmother would never withstand such a beating.  The strong wind gusts pushed me to the front of the building, and a student going inside instructed me to press the button, and the higher-ups would unlock the door and let me in.

The front desk ordered me to go to admissions to sign Granddaughter out.  There was a slight wait.  Only one person is allowed in the office at a time.  Something was amiss.  The secretary was on and off of the phone.  The only words that resonated with me was fire drill.  Fire drill?!  Oh no.  So, I gave her Granddaughter's name, and she made a call on her phone to have her come down.

Outside, the wind had escalated, and the leaves were angry - filling the air.  Kids were filing out of the building and lining up.  I'm like...  What the...???  I hadn't signed up for this.  All I wanted to do was sign Granddaughter out and take her home.  A little anxious, my super-hero cape began to break loose and I started to feel just a bit light-headed.  Where was Granddaughter?

The band starts playing.  The emergency was beginning to be fun.  The band was inviting a more festive ambiance.  Without my knowledge, other participants had integrated me into a fire drill/pep rally thing.  Not one person had prepared me for this.  I was back in high school and wished I had worn my ripped jeans and done something with my hair.  If I didn't have to take Granddaughter home I could try and blend in with the rest and enjoy the pep-rally.

I found Granddaughter and announced to her peers surrounding her that I had permission to take this beautiful girl home.  She stormed to the car then, reporting to me that I had embarrassed her in front of the other kids by making the statement I made.  I smiled.  "It's what we do," I said.  "It’s a grandparent’s job."

Granddaughter inconvenienced me.  I embarrassed her.  Now we are even. Haha!  We are good 😊 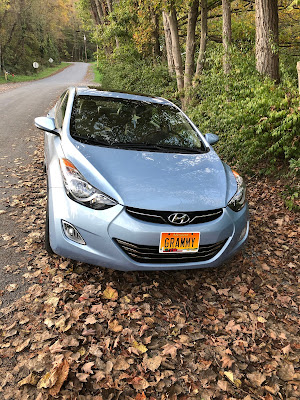 
Pulling Dad's letters from an old tin,  I feel his loneliness as I read his letters home.

"I have been transferred again, this time on a ship..."

"Have you seen Jo lately?" 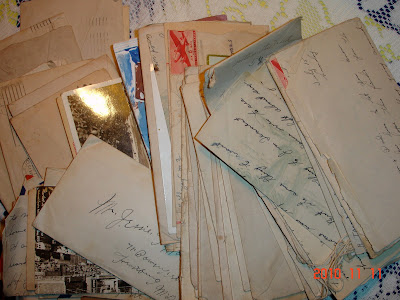 "Just a few lines to let you know I am well and hope you all are the same.."

"How's the garden getting along this year?"

"Don't forget to send me some pictures..."

"We sure have been having good news lately about the war.  It looks to me like it's almost over..."

"I haven't gotten any mail from you in about a month. I guess I'll get it all at once..."

"I don't want to miss this chance to get home for Christmas..."

"Have you seen Jo lately? I wrote to her tonight. Tell her to answer and let me know if she gets it..."

"Well this makes almost 2 1/2 years I have been in the Navy.  It don't seem that long. I am getting to like it better than I did before. I get to see a lot of places and things.." 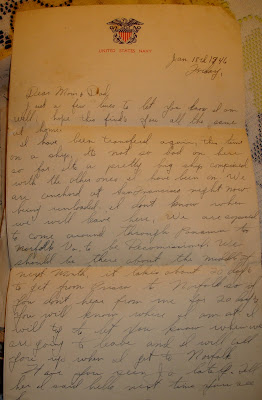 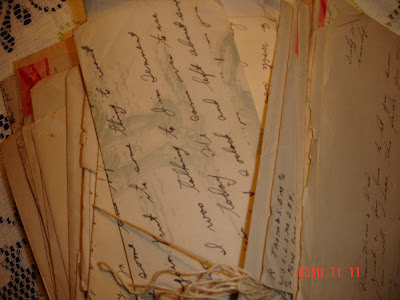 
Dad died when he was just 53 years of age, leaving with me many memories and a heartfelt gratitude to God for an earthly father who was quiet, loving, generous, compassionate, hard-working, and honest.

I was blessed with two brothers who also served in the military, Jimmy, Marines and Larry, Navy.

God bless those who serve... who give of themselves...  to keep our country a safer place.