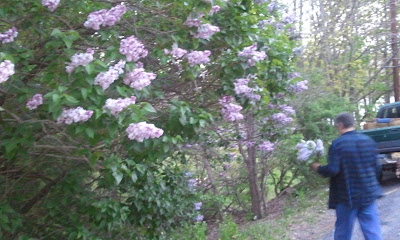 The smell of lilacs bring back a memory for me.  It was a simple place.  A carefree time.   No worries....

A Day In the Life 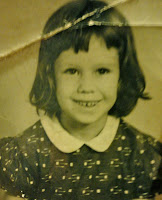 The house was quiet, all but for the sound of a robin chirping outside our bedroom window.  My two older sisters were still sleeping across the room, taking advantage of the first days of summer vacation.  School had been out for over a week, and the days were glorious, with no cares.

It felt good as I stretched my arms above my head.  The room was bright from the sun, and it didn’t matter that it was 10:30 and I was still in bed.  There was nothing planned, nowhere to go.

The living room of our little four-room house was converted to a bedroom for my three brothers at night, with Jimmy sleeping on the couch, and Larry and David opening their ‘roll-a-way beds’.   I needed to pass through there to get to the kitchen.  My brothers were still asleep as I made my way through the cool darkened room, careful not to wake them.  My arm brushed against the cold potbelly stove and then I pulled aside the curtain that separated the kitchen from the boy’s room.

“Shut the curtain!” Jimmy screamed.  I stepped down into the kitchen and pulled the curtain closed behind me.

The kitchen was warm and the wringer washer sat in the middle of the floor.  It was Monday; wash day.  The room belonged to the smell of Oxydol and Clorox and the humming and swishing sound of the washer.  Sitting down at the formica table, I picked up my report card and once again went over it from the week before.

Roberta Thomas will be in grade 2 next year, it read.  I was proud, not only that I passed… but that I had gotten all A’s and B’s.  I put down the white report card and skipped to the screen door looking to see if Mom was outside close by.  She was hanging clothes on the line.  The screen door slammed behind me but not without letting a fly inside.  Those pesky flies…  they seemed to gather there at that door, buzzing loudly and just waiting on their chance to sneak in.

I sat on the porch step watching Mom and breathing in the fresh lilac bush that infiltrated the quiet morning air.  That scent was confirmation that the school year was over, summer vacation was beginning, and my life was perfect.  Soon my siblings would be awake, and chaos would replace the calm.

Later that morning I walked down a weedy path leading to the apple tree in our neighbor’s yard, and Rita and myself along with a neighbor, climbed the tree and collected pockets full of green apples.  As I sat in the shade of the tree, a cool breeze brought goose bumps to my bare, skinny legs and I brushed an ant from my arm, as I bit into the hard sour apple.

“Did you bring the salt shaker?”  I asked.  Rita pulled it from her pocket and handed it to me and I poured salt over my apple and then took another bite.  It was delicious and tart and I ate it up.  We each ate several, discarding the wormy ones.

“Let’s go to the hut!” Rita said, tossing her dark stringy hair over her shoulders.
“Jimmy won’t let us,” I said.  Jimmy had created the hut on the side of the hill just below our house, a refuge of sorts to get away from our parents.  Paths were beaten down and signs were posted to KEEP OUT>  Though certain few had Hut privileges, namely Jimmy and Rita, who were the older and more respected of the bunch, us younger ones were sometimes invited briefly to explore the secret place.

“I’ll ask if it’s okay,” Rita said, jumping from the tree and scraping her bony knee off a wayward branch that had fallen to the ground.  She ran toward home, and I followed.  We cascaded down through the yard to the green hillside where we came to an abrupt stop.  Mom was standing close by and looked worried.

“Jimmy just killed a snake,” she said.  I quickly looked down at the long grass beneath my feet making sure there were no more snakes lurking about.  Rita’s eyes were wide and afraid.  Jimmy poked at the ground with a rusty coal shovel and picked up the long black snake, laughing and walking towards us, the ugly snake dangling lifelessly, provoking us to run up the hill and into the house.

Carefully drawing squares onto the pavement above our house later that day, Angie numbered them and we took turns tossing a rock, playing hopscotch.  Then we heard a faint ‘ding.. ding… ding..’ sound in a distance and ran for the house.

“Mom, can we have a dime?”  I asked.  The Ice Cream Truck was in the neighborhood.

I ran to the corner of the room and grabbed her black patent leather purse, handing it to her.  She filtered through tissue, teaberry gum and a brush to find her change purse, and pulled out two thin mercury dimes, handing one to each of us, and we ran outside to wait along the road.  Soon the noisy white truck was in front of us, and we were standing in line at the magic window.  Soon chocolate ice cream dripped down my arm as I hurried to finish my cone before it melted.

Later that night we watched our black and white television.  It was raining outside, and the picture was clearer than usual.  The antenna on our roof brought in NBC crystal clear, but CBS was usually too snowy to watch, so this was a treat.  The room was dark but for the warm glow of entertainment in the corner of the room.

Later that night all television programming would be off the air and the living room would be transformed back into the boy’s bedroom.  Tomorrow would be another day, and there would be much to be enjoyed.