“When you lose your eyesight you lose contact with things. When you lose your hearing, you lose contact with people.”  ~  Helen Keller
I can't imagine losing either one, and I am thankful that God continues to bless me with working senses.
With his permission, I'm going to talk to you today about my  friend, Cecil Kenner, who came in for an aftercare check-up on the hearing aid he purchased last week.  Cecil is 78 years old and went from 250 lb. to 178 lb. in the past eleven months, after his wife died unexpectedly.  They say everyone has a story...  and his is one that shouldn't go without repeating.  As a matter of fact, he repeats it often and it's like hearing it brand new each time.
He and his wife had a total of 40 children.  Ok, so 3 of them were theirs naturally, 34 were foster children, and 3 were adopted.  The foster children came and went...  most were infants needing care while the parents were 'getting their act together' and they would return to their parents 5 or 6 months later.  Cecil and his wife would counsel the parents when they'd come to visit the children... and encourage them to stop drinking and fighting so the babies could be returned to their home.
It wasn't always easy.  There were angry children who needed direction and special needs children who needed love.  There were court battles, lawyers, and determination to adopt when it was necessary.  But the Kenners always triumphed and the children were the real winners.
They'd take the children to church every Sunday and in addition to fostering, parenting, and adopting, they would would go to the local orphanage on some weekends and bring children home with them for a weekend visit.
You might wonder how they got into this type of thing to begin with.  Well, Cecil's mother-in-law had in the past fostered over 50 children altogether.  Years later, and after his mother-in-law had passed on, a blue truck pulled onto his road and stopped.  A girl got out of the truck because she recognized the house beside theirs that the mother-in-law had once owned.  "I used to be a foster child there.." she said.  "I remember when I was adopted out...  I didn't want to leave."
"I'm a little down today..."  Cecil said.  His eyes were red beneath his wire rimmed glasses and I could tell he was fighting back tears.  Today was 11 months since his wife passed from this world to the next...  and he misses her so. 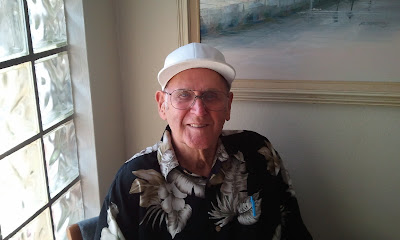 Cecil's wallet is thick with photos and he's proud of each and every one of his children.
As I said before... I'm thankful for my God given, working senses.  But today, I'm particularly thankful for my hearing.. for without it I would not have known about a beautiful family who gave so freely without expecting anything in return.
God Bless you, Cecil
and you're beautiful wife.
Until you meet again...