Once again, Facebook has become a battleground for political argument.  And yes, I get sucked right into the drama as I feel the need to share my opinion and thoughts as well.

I respect deeply everyones right to their own opinions, thoughts, beliefs etc.  So I rarely share my 2 cents worth on someone else's fb post if it goes against what I believe is right and true.  Let them have their own circle of friends high-five them on what they believe to be right.   Who wants argument!

If the posts that I share are offensive in any way to anyone, then I would hope that the opposing opinion would unfollow me.  (I learned this is possible last year after it was too late - when I un-friended 3/4 of my Facebook friends because of political differences in hopes for a more peaceful Facebook experience)   Un-friending leads to hard feelings and sadly,  relationships with family are affected.  Now, if I do not want to see a friends posts, I just un-follow them.  Still friends. Just in disagreement about some stuff.  Absolutely no hard feelings.  (Forever learning!!)

One might say, I go by facts only.  But really...  will the media be honest in reporting facts or will they slant the story to make it juicy?  We should never let media news be our final enlightenment.  I'd say...   dig a little deeper if you want truth.

Though sometimes I put my foot in my mouth, I try to choose my words wisely when I post.  As is in today's most recent post:

So maybe there is something I am not understanding. I just watched a news clip where one of the Muslims that were detained at the airport was released just days later. All checked out okay. My question is, how will our president fight terrorism if he does not take the steps to do so? Personally, if I were detained for a couple of days in order for me to be 'checked out' to make sure I was not a terrorist, I might be a little put out by it but looking at the big picture it is for my own safety. If I am innocent, why would I make such a fuss? Shouldn't we be willing to be a part of the fix for the problem? I am not saying this to start an argument... I just truly do not understand. Are these detainees being tortured or not being fed or being mistreated? I will give you an example. Many years ago I sat in my old beat up car along the quiet country road waiting for the school bus to come and drop my kids off so I could take them home. A police officer pulled up in back of me and came to my car asking me for my registration, etc. He checked me out. Asked me what I was doing there. Said I looked suspicious. Honestly, I was okay with it. Just an officer doing their job. Is there something I am not understanding about this whole thing?

If you disagree with my above post, I love you anyway.  It is not for the sake of argument that I share my opinions.  I am open for opposing views if they are shared in a respectful and smart way.  All I ask is that you view my opinions with equal respect.

What I have found to be true is that if you are labeled a liberal or left, you do not agree with anything on the conservative or right side.  And visa-versa.  Am I right?  We no longer have true thoughts on our own...  we rely on our 'party' or affiliation to decide for us.

It's Bun-Bun.  He runs from me.  I chase him.  I catch him.  He laughs at me.  He hides and squeaks and teases me.  I think he should sit still and let me chew his ears off.  He disagrees.  But at the end of the day, he's still my buddy.  Gracie. 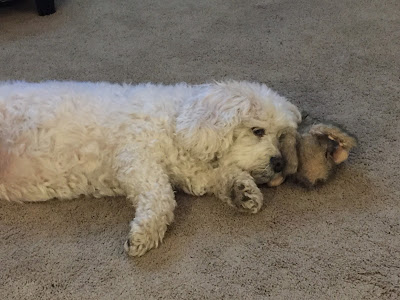