An excerpt from Gracie's Diary (my memoir that will soon be finished):
Weeks later Mike came to visit en route to Pennsylvania from his Florida winter retreat and I spotted him walking toward our office wearing his infamous faded jeans and a cream colored jacket.  He sported a deep healthy tan and his arms were full with a plant, a plaque that read Love One Another, a poster with ten rules for a happy marriage, and a package of multi-colored Bic cigarette lighters he’d bought for a dollar at a yard sale.
“Dad, welcome back!” Gary said, hugging him.  I hugged him too and he handed me a lemon tree and a birthday card.  He hadn’t told us he had lost weight.
“Happy Birthday,” he said.  I examined the healthy tree, but didn’t let on that it would more than likely be in plant heaven within a matter of weeks in my care.
“Thank you!” I said.  “You look great!”
He winced when he lowered himself to sit in one of the waiting room chairs, his hip still paining from the skateboarding incident. I opened the birthday card and read the heartfelt words; then tucked the $400 in my purse.  Next year it would be $500.  Every year he’d add another hundred dollars … it’s just something he did.
Gary's father passed away just weeks later.  But his gift lives on, thanks to Gary and his green thumb.
Every spring we lug that tree outside.
Every fall we lug it back into the laundry room next door.
Mike was known for his frugal ways which included making free lemonade from his water, lemon wedges and sugar when we'd go out to a restaurant to eat. 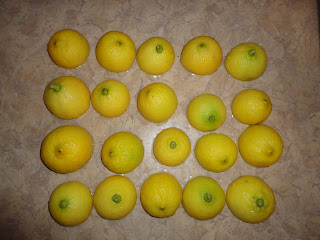 He was also known for his positive attitude in general throughout his life.  He'd take the lemons of life
and make lemonade.
This year (6 years later) we got our first lemon crop and today
his son took the lemons and made the most wonderful lemonade!  Mike would be proud! 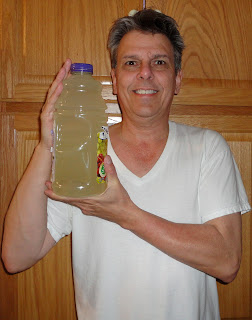 2019 A GRAND YEAR FILLED WITH GRAND-DOGS AND GRAND KIDS 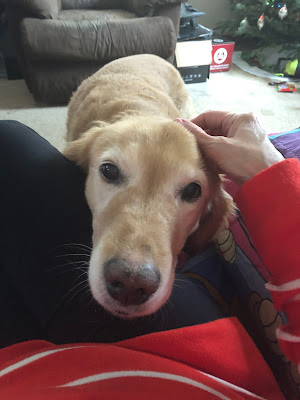