Dear Diary,
Okay.  So this is the thing.  In order for me to get comfy at night, I sometimes have to stretch out.  Way out. 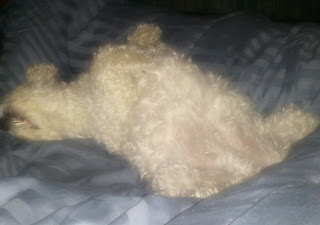 If Mom and Dad have issue with that, then they need to get a bigger bed.
Simple as that.  Gracie. 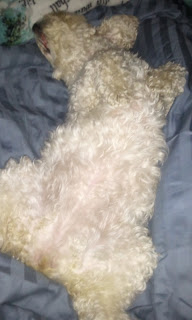 Email ThisBlogThis!Share to TwitterShare to FacebookShare to Pinterest
Labels: dogs

I work in a hearing aid office.
Several months ago it was with a sad heart, (and after my hubby told me that he died), that I scribbled deceased on Dale Wilkinson's file and tucked that file away neatly in the closet with the other deceased files.
You can imagine my surprise when the phone rang last week and Dale's voice was on the other end requesting an appointment.  Yes, you guessed it.  Dale was back from the dead.
Note to self:  Always investigate thoroughly when a patient's name is found in the obituaries.
Though Dale hadn't died, he had come close.  The past year wasn't a good one for him and he was in the hospital with no hope of recovery.  Against all odds, Dale pulled through and his positive attitude never left him.  Next stop - Nursing home.  "I'm staying 17 days!" Dale told them there... even though they were calculating his $$, his home value, savings etc.
Seventeen days later, he was home.
Dale lives alone and manages just fine, even though he is in the final stages of kidney failure, needs his mobile chair often, and can't live without his oxygen.  He is in his early 90's.  Since he refuses dialysis, it's important for him to be careful about what he eats and especially his salt intake.  Once a month (with his doctor's approval) he throws caution to the wind and takes his neighbor out for Chinese food.  He already has some of his garden ready for the year, and told me about everything he will be planting.  If you were to meet Dale, there is no way you would not smile.  Why?  Because that's a requirement in order to be involved in conversation with him.  You have to smile.  He says so.
Positive people.  They make a difference. 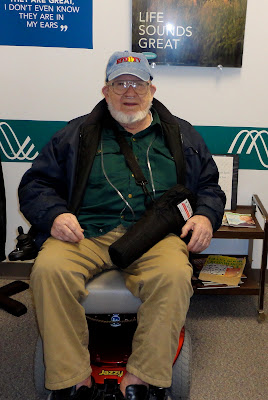 If you're reading this, don't forget to smile.  Otherwise, Dale would not give me permission to post this picture of him.
- March 23, 2011 17 comments: