Whatever shall I do with May?  How about a Recap of the Corona Chaos from the last couple of months?

It all started about the middle of March.  Rumor had it, the Chinese were torturing killing  selling fresh meat at a wet market in Wuhan, China and a bat (WHAT?  THE CHINESE EAT BATS?  That explains the chicken meat that was questionable chicken meat at the last Chinese restaurant I went to) spewed out a virus onto a worker there.  Can't blame the poor thing.  It didn't want to be put into the boiling pot now, did it?

The above could be rumor.  As could be that the virus was developed in a lab for our pleasure demise.  Strictly opinion, as far as I know.  I don't believe the facts are out yet.  Who would do such a thing!

Media showed a bat cave with hundreds of the rodent-like creatures flitting around and being caught and captured by scientists and tortured researched for different virus's... at least that was my understanding of what I was seeing.

Going viral, was horrifying video's of Chinese cracking into - and enjoying turtles, chewing on live octopus, talk of eating dogs, and many other stomach-lurching dining habits.  Ick.

Ok, let's get past that.

Anyway, it was not rumor but fact...  a virus was sweeping across the globe and there would be a pandemic of epic proportion. 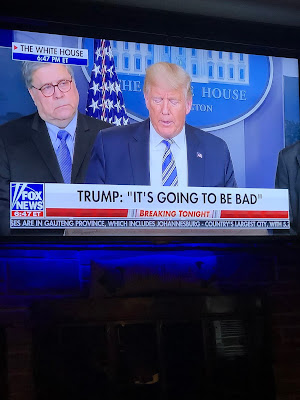 I have a dream journal that I visit every now and again, and I was taken aback by this post of November 19, 2019.