One Flew Over The Cuckoo's Nest

Last week we were driving to Frostburg and went past this sight for sore eyes. 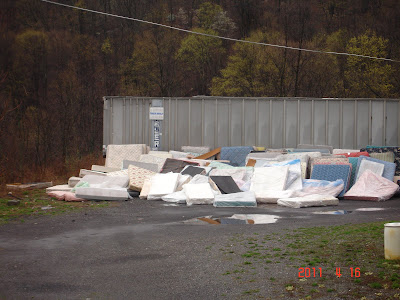 The Mattress Place had all of these old mattresses tossed out back.  Eek! 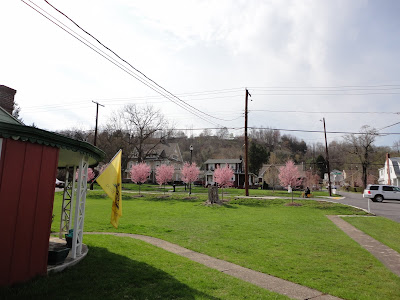 Easier on the eyes are these lovely trees that line the sidewalk right in front of our house and have come to life in a most beautiful way - welcoming Spring to the area.  When we first bought this house in '06 we sold a small portion of our corner-lot to the city .  They began work on a two year project then, and in the end our neighborhood boasted a sidewalk, soft street lights, benches, an extra lane of traffic for turns, and a bike lane.
We don't live in the big city... but it's not the country living that I'd been used to before.  Living in town took some getting used to.  There are perks though.  Dairy Queen is just minutes away, along with lots of restaurants and other fast food places.  The Mall is 5 minutes from where we live as well as several shopping plazas.  So I'd say convenient is a good word to describe our location.
Gracie's doing well.  She's on 2 perscriptions.  One is an antibiotic and the other is Tramadol for pain I suppose.  I hate giving her the pain medication because after she takes it her breathing seems to be labored and she's BLAH for the rest of the day.  Last night I was torn>  should I give it to her?  or not?  Finally I stuffed it down her gullet figuring it would be the best thing for her and that was in the vet's orders when she left the hospital.
I sat on the bed with her a few minutes later, caressing and loving on her...  and feeling guilty that I once again drugged my dog and knew she'd soon be in oblivion.  She was acting crazy, rubbing her face on her blanket, squirming, whining, and getting that far away look in her eyes.  That's when Gary entered the room with a little something he found on the dining room floor. 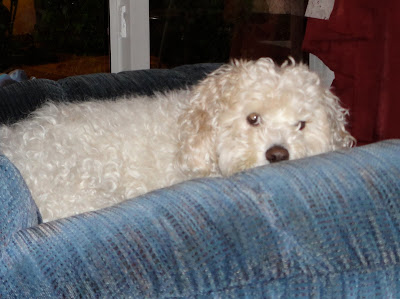 dear diary. nurse kratchet failed to zombie me out tonight after i hid the pill in my mouth, then spit it away minutes later onto the dining room floor. not wanting to over medicate me (just in case the discovered pill was from before) she didn't force me to take it again. i learned this technique from one flew over the cuckoo's nest.  jack nicholson is my hero. Gracie.