Orville and Lucy were both in their nineties when I came to sit with them about 11 years ago.  I took the 3 till 11 shift, since that was the one available.  They were the grandparents of my pastor and they were in poor health.


Lucy was bedfast and was kept in the living room on a hospital bed, with a portable potty close by.  Orville pattered through the house dragging his oxygen tubing behind him and watching me closely, making sure I didn't mess anything up.  They were from the depression era, and that meant they wasted nothing!!
I was ordered to cut the mold off the cheese, save all grease and lard, re-wash any disposable bed pads, don't let the cabinet doors slam shut, don't use too much water, turn lights out, and so on.  Orville even snuck out to the kitchen one night and filled the dishwashing liquid bottle with 3/4 water so I wouldn't waste the dishwashing liquid.  One day the old guy had me in tears with his ridiculous demands and I informed him he should find someone else.  That's when  I discovered the real man. He looked like he would cry, too.  He told me he was sorry and that he didn't want me to leave.  We came to an understanding that day.  He learned to appreciate me and I learned to respect him. 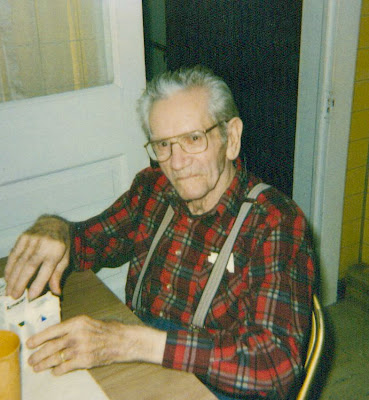 Now Lucy was a sweet, kind darling whom at one point was so sick she couldn't even eat.  We thought for sure we were going to lose her.  I would sit by her bedside feeding her popsicles with a spoon... and tiny morsels of cracker like a baby bird.  Weeks later, she was improving, then she was doing better.  She never worked outside of her home, she was mother and wife with seven children.  I'd sit on her bed at night and comb her long white hair, then braid it and pin it onto her head.  She had a squeaky, munchkin-like voice that I loved and she would worry about me when I'd leave to go home late at night.  "Be careful of the deer," she'd say. 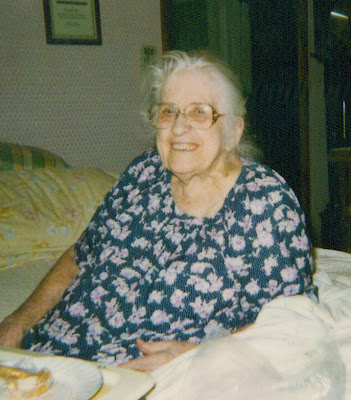 Orville too, would worry.  They'd say goodbye about a half-a-dozen times, almost like they didn't want me to go and they'd give me a hug before I left. I could feel the love.
Now Christmas was coming... and all three of us were lounging on Lucy's bed and talking.  We did that often.  I loved their stories.  Depression times were tough, but in Orville and Lucy's case it produced strong, good, ethical people.
I had fixed supper, washed the dishes, scrubbed the kitchen floor, and given Lucy her snack for the night.  I don't know how we got on the subject, but Orville told me he had boxes of Christmas decorations downstairs in the basement.  Christmas was three weeks away and the house was void of any sign of it.  "Let's decorate!" I said.  Orvilles eyes lit up.  Lucy grabbed a huge stack of cards from her bedside.  "Here, maybe we can show our cards, too."
Orville insisted on following me to the basement to help.  "Be careful you don't trip over your oxygen tube," I said.  He told me not to worry.  He was tough!!  The guy didn't look like he went any more than 100 lbs. and he still had his own garden out back that he took care of in the summer....
So we drug bag after bag of Christmas decorations up the stairs and I did my magic.  Hours later the house was lit up with multicolored lights and decorations were everywhere.
Lucy laid in her bed with Orville beside her, and I sat at the foot of the bed.  Christmas music played on the television.
Many memories were shared, but the most precious one came when Orville told the story about their baby that was stillborn.  They both wiped away tears as he spoke.  "That baby was so perfect, and so peaceful," he said.  "It looked like an angel."  I cried too.  He told me he'd never witnessed anything so beautiful as that baby was.
Before the evening ended, I took a few snapshots of them together with my instant camera.  They were amazed by how a picture was spit right out of a camera in minutes.  "Well, look at that!" Orville said.
A week later I brought them a snow-globe that played a christmas song, with their picture inside.  If I would have given them a brand new color television it wouldn't have meant as much.  They said they had never seen anything so nice.  If they thanked me once, they thanked me a dozen times.  And oh, the hugs I got that night!  Whenever visitors came by, the first thing they showed them was that simple snow globe.


Christmas is not about the amount of money that we spend.  It's about loving, giving of your time, caring, and being there.  God commands us to love Him, and   love our neighbor.


This Christmas, take the time to know someone, and give them something that money cannot buy.
That was Orvilles last Christmas, and Lucy passed a few years after that.  If I close my eyes, I can imagine the ninety year old couple lying close together on her hospital bed, watching the lights and smiling. 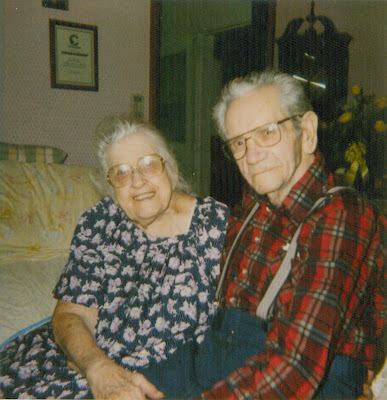