Below is a picture of my daughter Lindsey when she was a little girl.  Lindsey loved her baby dolls...  but as with most little girls, she had her favorite. 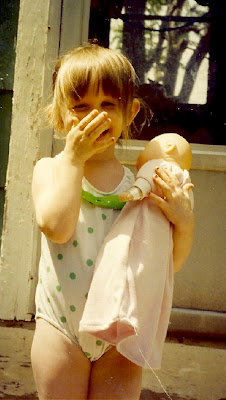 Maria sold for around $5 and I ordered her from the Family Weekly.  She was a girl doll.  There were boy dolls as well, and yes... you could tell the difference... if you know what I mean!
Lindsey named her doll Maria because she loved the song from The Sound of Music, 'How Do You Solve A Problem Like Maria'...  She  loved musicals!
One day Maria came missing.   She was nowhere to be found. After searching high and low, we finally concluded that a dingo the neighbors dog must have drug her off.  Try telling your three year old that her baby has been stolen by a wild animal and will never return!
So I did the only thing a mother in this situation could possibly do.  I lied...  just a little.
I told her Maria was misplaced, but we'd find her...
I promised!
Then I made one of the best investments that I've ever made.  I ordered 3 more Maria's from Family Weekly.
Something this tragic would not happen again!
The new Maria looked exactly like the old Maria.
(The other 2 I put away until I was sure the dingo neighbors dog didn't run off with Maria #2, then I got them out and informed Lindsey that Maria was now triplets.)
She was ecstatic!
So now she had Maria, Maria, and Maria.
Don't ask.
Only one Maria lived to see Lindsey grow into adulthood and have a baby girl of her own.  That Maria was passed around at Lindsey's baby shower during a game of 'pass the Maria'.
Maria went on to become Rissi's doll and was mostly a bathtub doll.  Maria drank a lot of bath water and peed in the tub.  Her insides became icky after a while.  A few months ago, after examining Maria closely I decided it was time to say goodbye...  and move on.
It wasn't until I was visiting our local flea market last week that I thought again of Maria. 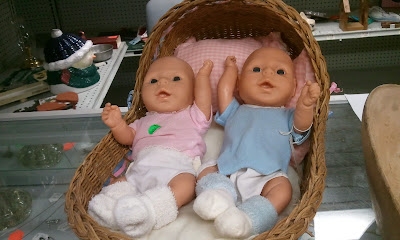 There she was...  and she had a brother as well.

I thought of buying her... 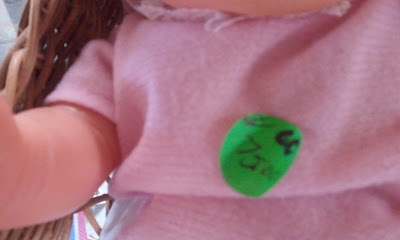 But then decided...  maybe not. 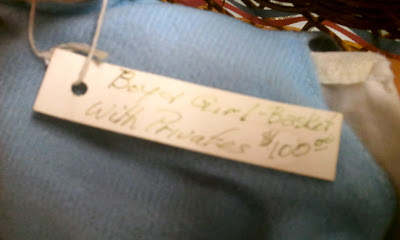 Maria.
Gone but not forgotten.