After meeting online in March of 2001 Gary and I began a long distance relationship.   I remember fondly our first New Years Eve together.  He had to work that week and so I did the 8 1/2 hour drive to his place.  He worked second shift so I was left alone to my own devices and so I conjured up a mini celebration dinner for the two of us to celebrate and to bring in the new year 2002.  There was a small market just blocks from his Chesterton, Indiana home and so I went there and gathered up some  jumbo shrimp, baked beans, potatoes and eggs, and a bottle of champagne.  I breaded those shrimp and fried them up real nice and made homemade potato salad and baked beans  and then I lit a candle just minutes before he walked in the door.  It was romantic and special.   I am thankful for pictures...  that remind me of those special moments from the past. 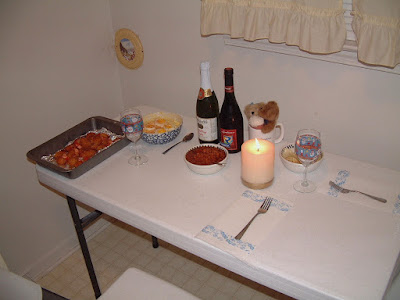 I remember...  twelve Christmas's ago...  when I was a Christmas present beneath a tree.  Oh the memories of those times!  Outrunning those who would run after me...  as they would try to punish me for doing something naughty...   Those days are over though.  It is doubtful that I could run that fast now.  Although dad could not catch me yesterday when I was running at the tennis courts.  I was moving!!  Trouble is, Yesterday I was moving... but today I can't even jump up on to the chair.  Guess the minds willing but the body...  oh... the body.. I move, I pay.   Gotta go.  Gotta rest.  Just as soon as mom lifts me onto the chair.  Gracie. 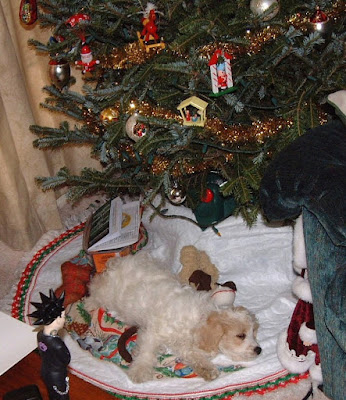