Yesterday was quite long, as we drove to Baltimore to pick up #1 Son and then back home.  The first thing I noticed upon entering the hospital was the smell.  I'm not sure if I liked or disliked the smell but it was different.  Jack was in the old part.  The building did not lack character.  My surroundings caused my mind to wander ... I'd been swept back in time...  placed in the middle of a 50's movie of some kind.  It was interesting.  Jack wasn't ready, so it was a waiting game in his room as nurses and doctors trickled in to remove picc line, tubes, etc. and go over orders with him before going home.  Our plan was to visit the Jesus statue and to stop by the pharmacy to pick up his meds on the way out.

We did the pharmacy first.  The line was long.  So we waited.  Finally at the front of the line we found that his script was not called in.  So we contemplated on what could have possibly went wrong.  Where to go from here?  The hospital is huge!!!  We searched the hospital map and found another pharmacy in another part of the hospital.  It was the correct one.  Only one person in front of us.  This lady talked for a good twenty-five minutes to the pharmacist.  Laughing.  Asking questions.  Telling stories.  Asking more questions.  Ignoring the poor boy hunched over in pain with a bag hanging from his side, barely able to stand up.  She didn't even get a script. 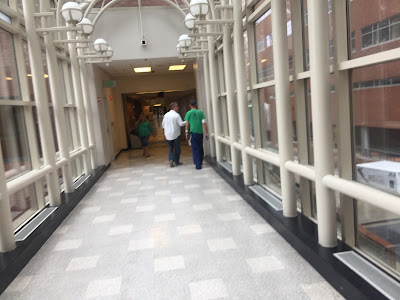 I felt horrible for Jack.  I could tell it pained him to walk and that he was really weak to stand there.  I told him to go sit and I would take care of it but he wouldn't.  All the walking and standing.  Big mess with the insurance and scripts.  After a couple of hours of trying to get his meds we ended up leaving without them and without seeing the Jesus statue.   According to my IWatch we walked a total of 2 1/2 miles inside John's Hopkins Hospital yesterday. Jack moved slowly and I could tell, he pained with each step.  The car was parked in a garage somewhere in Timbuktu.  Don't ask.  But finally we made it there and sure enough on our way out of town the pharmacy called to let us know that his prescriptions and insurance had cleared and everything was ready for pickup.   Jack told them to call the script in to Frostburg and thanked them for their trouble.  He goes back to get the drain out in 2 weeks and then he will need to gain weight and strength for surgery that is planned for early January for a resection of the intestine.  Please continue to pray. 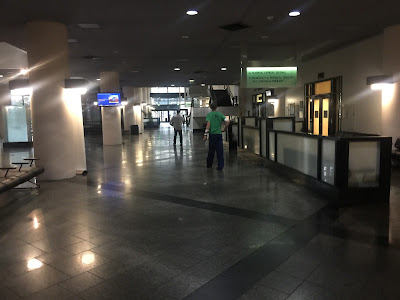 The drive out of there was a piece of cake.  We followed the GPS and she did not disappoint.  We were easily on 70W and heading towards home.  We stopped at Golden Corral in Hagerstown.  Jack wanted bread pudding to take home and both Gary and he wanted to go inside to eat.   Jack had to tuck that drain bag inside of his pajama pants and shuffle into that overly busy restaurant through the thick crowds of people in order to stand in lines to get food and it was so busy!! He must have been pretty hungry for some real food.

After dinner, homeward bound.  It had been over two weeks in two different hospitals.  I am thanking God for getting him through this and for our safe travels and his return to home and family. 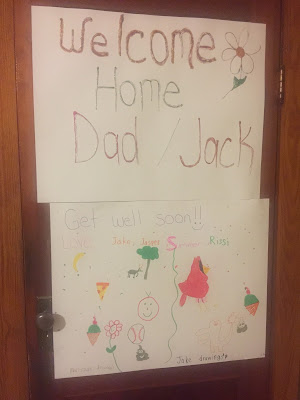 Jake is glad to have his dad back home.  He fell asleep in Jacks arms last night while they watched a movie together.

Ginger, his golden girl was happy too. 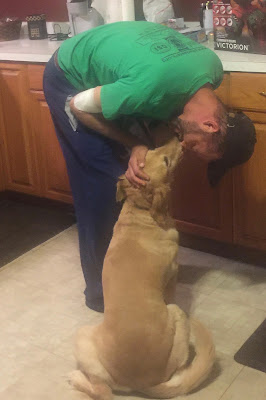