An Army of Ants

Okay, so I'm not the best writer in the world.
I realize that as I go over my 'memoir' again and again.  I'm always changing it to make it better.
My big reason for writing "Gracie's Diary" is for Gary, and what he's been through.  It's a story that needs to be told. AND> to share what I have learned in the past ten years about divorce and it's impact on our children.
It will be published.  Though I don't expect it to be a best seller.  Still....  it's my story.
See the ants on the floor below? 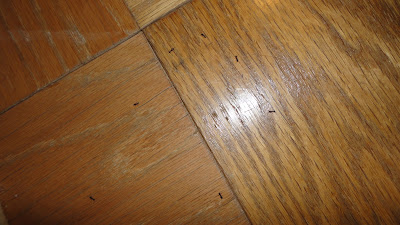 Yep.  We have ants.
And now I'd like to share an excerpt of
Chapter Nine  - The Money Pit.
Finally, peace swept over the Phillip household and April surprised us with scorching hot temperatures.  Windows were opened and fresh spring air circulated as I wiped down the living room walls.  I stopped abruptly to check on Gracie after her vexatious barks led me to believe there might be something alive in our bedroom walk-in closet.
“What is it, girl?” I asked following her angry barks.  I found her agitated and standing erect, looking straight ahead into a dark corner of the closet.  After turning on the light, I pulled back the clothes hanging in front of me, and grabbed her collar.  “It’s too dark girl, I don’t see anything.  Let’s go get a flashlight.”  Seconds later I was back with light in hand and without the dog. I pulled back the clothes and shined the light into the blackness, keeping my right foot close to the door in case I had to make a run for it.
“Oh my gosh!” I screamed.  “No!”
I picked up my cell and called Gary whom was grocery shopping at Wal-Mart, a chore he volunteered to do in order to keep me from spending too much money.
“We have a huge problem!” I said.
“What now?”
“You know the electrical outlet in our closet?” I said, my hands shaking.
“Yeah, what about it?”
“Well, there are a billion ants around it, in it, on it, covering the wall, and crawling through the carpet.”
“I’ll get some ant traps while I’m here,” he said sounding way too calm.
“We need to call Terminix.”  I said.
“We have bug spray,” he said.  “I’ll spray them.”
“We’re calling Terminix!”
Like the battles with my teenagers, the ones fought with my husband were carefully thought out as well.  This was an argument that I had no intention of losing.
“Oh, brother!  How much is that going to cost?” He asked.
“I have no clue, but I have their number right here…” I said thumbing through the yellow pages.
“I’m not paying hundreds of dollars for some guy to come in and spray stuff around when I can do the same job with a few ant traps and a couple bucks...” he said.
The white Terminix truck pulled onto our dirt road the next day and a guy with my husbands exact first and second name,Gary Michael, sprayed our house inside and out.  He introduced us to an army of ants marching single file up the house, all heading for my bedroom closet.  I’m not sure what the attraction was, but I wasn’t about to spend my free time trying to get into the mind of an ant.  I just wanted them gone.  Terminix promised to rid our house of unwanted bugs.  They did a wonderful job and it was money well spent.  Gary wrote out the check.
Dear Diary,
My new mom and dad seem to have issues.  They are so up and down with their emotions.  One minute I’m cuddling on the couch with one of them thinking, life doesn’t get any better… the next they’re telling me I’m one bad pup!
I’ve grown attached to them in spite of their abusive behavior.  Mom opened the door one day and insisted I go outside right in the middle of a downpour.  I just turned right around and said, ‘I’m not going out there.  It’s raining to beat the band.’  She pushed me out into the pouring rain anyway, and I came back inside all damp and cold and on the verge of being sick.
And then there was the time I was playing keep-away with her, (I love that game) and we were playing with dad’s good sock.   She’s not a very good sport though… when I finally surrendered, she smacked my butt.
Oh, and one more thing… who can forget the day everyone was mad at me, including Lindsey, and I spent the day in my cage.  I needed something to chew on, so I went for a shiny hard thing she had in her purse. Ahhh, it felt so good.  I’m still cutting teeth, you know!  It was for medicinal purposes. I must say… these people don’t have much compassion for a dog in pain.  It’s all about them.
Lately the sun has been shining and I feel
g-o-o-d!  There’s a dog that lives above us named Poncho.  He is one hot Shiatsu!  He liked me at first, I could tell, but then one day Mom took me to see Dr. Fox and a girl there put a needle in me and after I slept for a long time I woke up and my belly hurt.  I was groggy for days.  After that Poncho had attitude, glancing down at me when I was in the yard, then slinking back into his own house… playing hard to get.  My mom said it was ‘cause I was fixed.  But I seem more broken if you ask me.  Mom say’s Poncho’s my boyfriend.  I’m not exactly sure what that is, but when she says, ‘Gracie, there’s your boyfriend,’ I run to the window to look and by golly there he is standing up on the hill acting like he doesn’t care.
Oh… and let me tell you about today!  Whoa, what a rush!  Bugs everywhere!  Then some guy came to our house with a big metal bottle hanging off his shoulder.  They locked me in my cage for the longest time and the guy invaded our house, he did.  I barked myself hoarse.  It sure smells funny in here now…
I told Gracie.  Don't expect much.  Mommy isn't the best writer in the world. 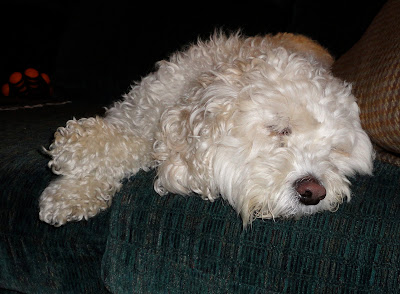 But Gracie has her paws crossed. 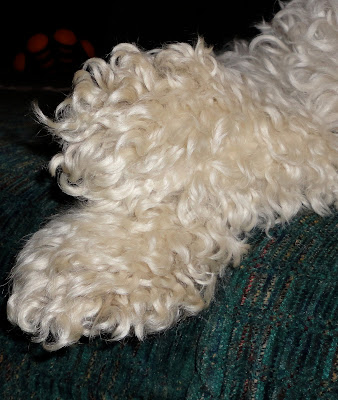 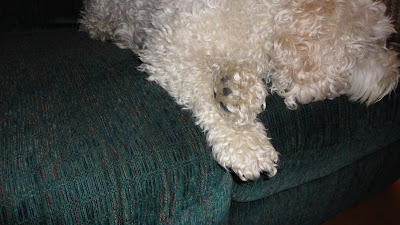