Gracie's regressed bad habit of pooping on the floor has brought back a not-so-pleasant memory of our first year with our new pup.
Just thought I'd share a little from the book:
We put up barricades to protect the white carpet from Gracie who was nervously peeing and pooping in fifteen-minute intervals on the shiny kitchen floor.  An end table, a living room chair and a bookcase kept her from real trouble. 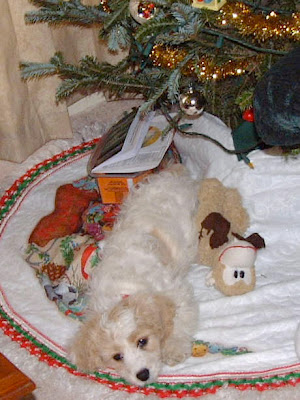 After observing her bathroom habits, I took her out for potty minutes before her next spill was due, but she was too interested in smelling the ground and bouncing around being cute to do her business where she was supposed to do it.  After I brought her back inside, she squatted and let loose. 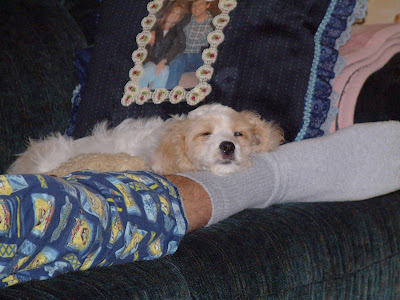 “I think she needs smaller confines,” I said.  So we sectioned off a part of the kitchen calling it Gracie’s corner.  A long kitchen bench flipped onto its side, a big box of stuff, and a five-gallon jug of water separated her and her cage from the rest of the kitchen.  “That’s better,” I said.  “At least now her mess won’t be all through the kitchen.”  She looked sad as we walked away, and guilt consumed me because I was secluding her from the rest of the house, but as I turned to take one last look at her sad face I noticed that she wasn’t sad at all and was trotting happily next to me into the living room.  “Gracie!” I said. “How did you get out?”  The walls handiwork in Gracie’s corner revealed a flaw in its construction so I stuffed a towel into the little opening that I hadn’t noticed before, and then placed her back in her corner.  This time she didn’t look so sad, and five minutes later she pranced into the living room ferociously tossing the towel into the air and catching it again.  I was tired and not amused.  I just wanted to go to bed. Then the voice, 'enjoy you’re new puppy… idiot'.
I helped Gary bring up an old door from downstairs and we placed it where the other smaller barriers had been. Gracie whined as we left her behind in her own little space, and she finally gave up and went into her cage to sleep. 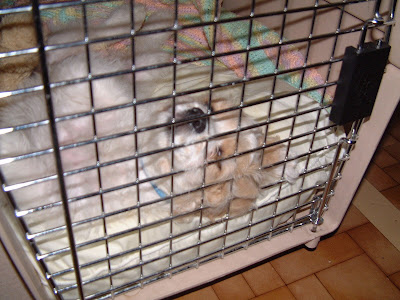 Dear Diary,
I’ve been kidnapped.  They keep calling themselves Mommy and Daddy, and I think they’re trying to brainwash me.  It feels good to lie down though and rest my weary bones.  Speaking of bones, I wonder if they have anything I can gnaw on.  My teeth are killing me.  (Sigh)  I miss my real mom and dad.  I wonder what they are doing right now, probably missing me.  Well, I guess I’ll just have to make the best of things.  Oh, did I mention that there is another person that lives here?  Her name is Lindsey and she smells good.  She’s one of those teenagers they talk about.  I’m going to try to get in good with her, so maybe she can help me escape and find my way home.  Maybe she’s been kidnapped too.  We can break out together.  Well, guess I better go.  This strange woman wants to take me out to potty again, whatever that means. 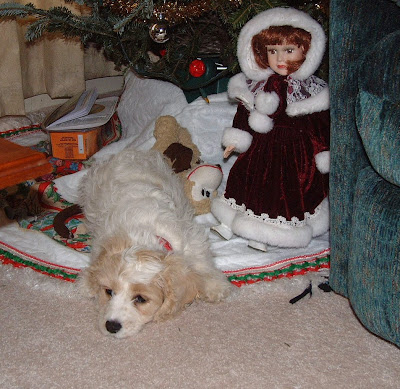