A little over three years ago Gracie got deathly ill after getting a combo rabie / distemper shot.  She was sick for weeks.  After online research I found that she wasn't the only dog that's had a bad reaction to the vaccine combo.  Other research showed that I should never get all of the vaccines at the same time since she had a bad reaction.
I've put this rabie shot off since last October, but I know it's a law and it had to be done.  I also need to get her groomed, and first she needs her rabie vaccine.
The vet has in her chart THAT SHE HAD A SERIOUS REACTION FROM THE COMBO VACCINE LAST TIME.  I've talked to the vets over and over again about her bad reaction last time.
But>  Gary took her this morning to get it done while I went to work.  When he told me on the phone that she had gotten the combo shot MY HEART DROPPED!
She's vomited 1X since she has been home.  I pray that it ends there...
I called the Animal Hospital and asked why they gave her the combo and the vet said she didn't read Gracie's chart because Gary said it was okay to give her the combo.  ???  Gary said he did not say that>  He specifically told them not to give her the 'cocktail' just the rabie shot.  He actually called me at work while he was in the vets office before her shot and asked me what kind of reaction she had and I went into detail.  Then the vet went ahead and gave her the combo shot anyway!!  I guess you could say I'm a little angry.
The vet told me that she's on call this weekend and she'll be there in 20 min. should Gracie need emergency medical help.
The vet was kind enough to give Gracie a 3 day supply of  'free' pepcid and benedryl 'because of the misunderstanding'.
Over the past 2 months I have become $2,000 poorer and The Animal Hospital has bcome $2,000 richer.  Kind of them to give me the $17 prescription for Free, wouldn't you say?
Poor Gracie.  She's been through so much these past few months.
I guess it's time to look for another vet. 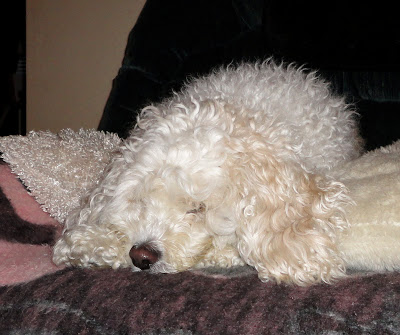