It was on this day 31 years ago that I gave birth to son #2 at 8:35AM.
As I sat in my hospital bed, staring into the face of my angel, a young girl wearing a terry cloth robe scuffed across the hall and slipped into my room. "I've been watching you from across the hall", she said.  "Can I see your baby?"  I smiled big as I held my bundle out for her to get a better look and she smiled too, touching his head and then his fingers and toes. 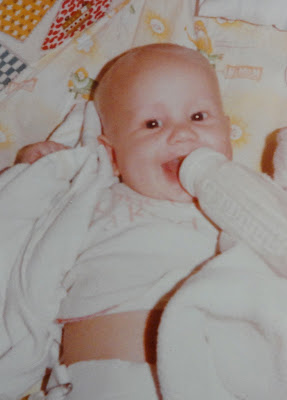 "I lost my baby last night." She said.
My heart dropped.  Somehow my new son had become even more special to me at that very moment and I understood even more - how blessed I was.
Justin was the middle child.  When Lindsey (the baby and only girl) came along, Justin was 7 years old, and very noticeably pushed to the side to make room for the new and cute one.  If I hadn't video taped so much  I probably wouldn't have realized this. 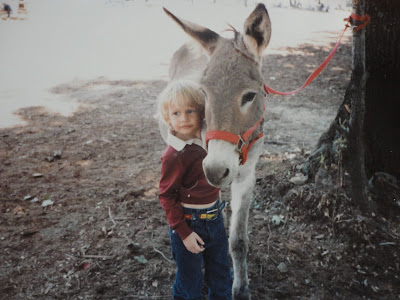 Justin was special.  He required one on one attention and Special Ed in school.  He learned slowly and hurt easily.   When he graduated high school, he received an award. 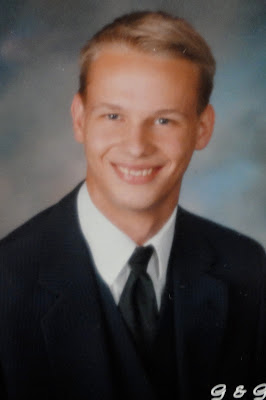 After a few failed jobs, he found his place in a movie theater as a janitor.   He once found a $20 bill in the parking lot and gave it to the theatre manager hoping she'd find it's owner.
He slid a $100 bill under the door of his sister one day, not saying a word or taking credit for helping her out at a hard time in her life.  You see, he felt he was still rich because he had $50 left over.
He has been through several jobs, the longest being a Walmart employee where he worked stocking dairy products.  He quit there to go to a telemarketing position where he'd be given time to work on his fantasy novel that he was writing.  After a week at the telemarketing place, he was fired when he didn't pass the required test. They hadn't told him that part.  Walmart wouldn't hire him back, and wouldn't allow him to collect unemployment.   A few months ago, and after two years of no work, living off of the government, and begging money off of family and friends, he sat in my office with silent tears streaming down his face after he had to borrow money once again from his brother but not without a lecture.  Just then, Gary walked in and asked, "Justin, how would you like to earn a hundred bucks?"   Justin wiped his face and sat up in his chair.  "Yea..." 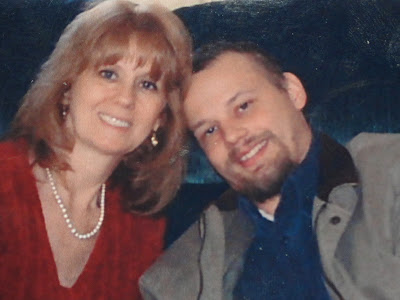 Justin spent the day working in our yard, pulling weeds and sweeping gravel from the driveway.  He came back the next day and worked more.  He did a wonderful job but never thought it was good enough and kept wanting to know what else he could do.  You see,  at that moment...  that turning point in his life... he was feeling needed once again and like he had worth.   He found a few odd jobs, then ended up back at the theatre selling popcorn part time.  Today Justin is on top of the world because he is working.
Justin is different, and does not learn or see things the way others do.  He wants to be independent and has a real hard time accepting help.
He is a fabulous writer, and I wish he'd let me share some of his short stories, but I know he won't.  You see, he thinks that he is going to be a famous writer some day and does not want anyone to steal his ideas.
Justin doesn't know and may never understand that it takes more than talent and perseverance to make it big in this world.  But, then again... that's part of what makes him special.
He is a dreamer.
Happy Birthday, Son.  You have a beautiful, large heart, and that makes me proud!