Even on the dreariest of days the sun seemed to find its way through the window-blinds casting the brightest of light throughout that aromatic kitchen of hers.  The smell was that of freshly baked chocolate chip muffins which could often be found cooling on a towel atop the shiny formica kitchen table.

The living room sat just off the kitchen and was furnished with a couch, a chair, a floor model black and white television set, and a piano which sat in the corner and held lots of framed family photo's.  Kids met there after school for a bible study, though I do not remember if it was once a week or more but what I do remember is that I felt honored that in this house, my grandma lived and that she was responsible for this meeting of many of my peers.

Just off of the living room the enclosed porch housed wicker furnishings, warm sunshine, and a feeling of total peace.   One Christmas our youth group visited there to sing Christmas carols for Gram.  I stood quietly in the back, behind all the rest of the kids on that porch as Gram handed out cookies to all of us.  When she acknowledged me as her granddaughter my heart swelled.  My Gram.

The cellar was small,  musty and damp and the stone walls were painted white.  There Gram worked on her carpet loom... weaving those rags in and out... working hard.

The narrow steps from the cellar led to a little room of sorts (or) more like a hallway which had a commode in it.    There was a curtain that separated this 'bathroom' from the bedroom next to it.

The big bedroom in the back had two double beds on either side of the room.  One was Gram's and the other was for whoever happened to be spending the night.  The room was old fashioned with dated beds and dressers and old quilts.  On a sunny day I remember watching silent dust particles infiltrating the air through the blinds and casting a vintage feel to the place I called Gram's room.  It was clean and neat though,  and always peaceful.

Gram use to sit us kids down on the porch and instruct us on how to cut the rags she had sewn for her rug-making and then she'd give us a dime for our labor.   That dime would go home with me and then directly to Fairdy's store where I would carefully pick out ten cents worth of candy to take home in a little brown sack.

We visited Gram often and when we would leave to go home, she would stand on that porch waving to us until we were clean out of sight.

Her house and yard was often thick with kids playing and laughing...

There was something about the lattice below Gram's porch that brings back fond memories for me.  Maybe it was that we used to play around it.  Maybe it was our safe place.   I'm not sure...  but I know I've dreamt about being there and the sun warming the lattice and peeking through to the darkness beyond there.

After Gram died the house went to family.  And then, later it was sold.

When it was in between owners, about fifteen years ago I'd say, Gary and I stopped one day to look around the outside.   To our surprise, when we tried the cellar door it was open!  And so we did what any curious, fond memory laden person would do... and we helped ourselves to a tour.

Gram's house was still laid off the same, but something was different.  The aroma of newly baked muffins was gone.  The kitchen seemed smaller.  There was no children's laughter.  No grown-ups joking, teasing, having fun with Gram.  Updated appliances and cabinets had replaced what was Gram's.  The magic was no longer there.

I'd pass by Gram's house often, usually thinking of days gone by in passing.  The house exchanged hands numerous times but then, I noticed a major overhaul on the place.  The classic look of old had been replaced with more modern curb appeal.  It was looking good and I was happy to know that a new family was making this house their home.

But then.  Sunday.  The fire.  The family was out of town, but two dogs did not escape the blaze.

I feel horribly for the family.  To lose their house.  Their dogs.  It must be devastating.

A house is just a house.

But as I watched the updates of the fire on Sunday... and photo's that were being posted on Facebook,  the music of my youth with Gram stopped playing.  The laughter.  The chatter.  The teasing.  The safe place.  All was gone.  And the smell of muffins burned in the oven as a flood of memories returned.  And then ceased. 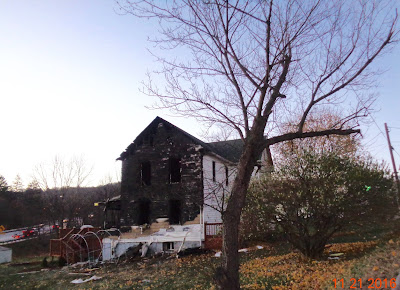